On a roll: Vinay Pathak 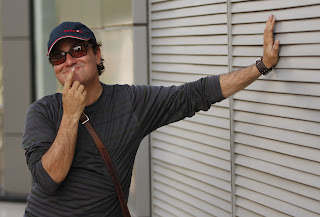 He is known for making our ‘Bhejas Fry’ with his histrionics and yet one can never get enough of funny man Vinay Pathak. Realising this perhaps, the actor is now coming up with a double bonanza of himself in this week’s release Utt Pataang. A comic thriller, the film will feature Vinay in a double role for the very first time.
“It’s a story of one night. And the fun and challenging part was to do a double role. I play both, the good and the bad guy,” exclaims Vinay. For someone as versatile as him, who has constantly been trying something different with every film, playing two drastically opposing characters --- one a simpleton, Ram, and another a sassy gangster, Lucky --- at the same time, was certainly a catch. “But I had only one request to the director and that was not to shoot the scenes of Ram and Lucky simultaneously. I am not a puppet. And I wanted to do full justice to both the characters,” Vinay informs us.
With the success of films like Khosla ka Ghosla, Bheja Fry and Johnny Gaddar, Vinay came to be known as the face of small budget cinema with a big impact. And now that there is finally an audience for smaller films, does he take this trend to be a parallel movement that’s running along with big banner and ‘star’ oriented films? “I don’t think it’s a parallel movement. It’s a merger of all kinds of cinema. We have become a huge consumer market and one good thing that has happened is that there aren’t only profile based and big banner films but also content and script-driven films. We have intelligent actors in the industry and we are evolving as an audience. The literacy of our mass audience is much higher today. It’s all about catering to one billion choices and lifestyles,” he elucidates.
Coming back to Utt Pataang, the ace comedian stresses on the film being “highly entertaining”, an aspect that he considers very important for a film to work. “I am not saying that a film should necessarily be a comedy always. Udaan wasn’t a comedy but it worked. The key is to present a story that has the potential to reach out to a universal audience. Besides, the burden on cinema is that it has to entertain or else one could very well make documentaries. There’s no need to make films. Hence, for me, it makes sense to do content-driven films which are entertaining as well,” he clarifies. Along with content, what plays an integral role for Vinay while selecting a film is how exciting it is for him as an actor. “I have to be stumped! It has to be something that I have never thought of before. And even after doing a mixed bag of genres, the media still has a big misconception about my films. I am still seen only as a comedian. Very few people talk about Dasvidaniya and Johnny Gaddar in which I didn’t play comic roles,” he points out.
The actor will be seen next in Bheja Fry 2 alongside a new set of characters and actors comprising of Minisha Lamba, K K Menon and others. “This is a completely different story as compared to the first part,” he says. Apart from this, Vinay also has Chalo Delhi with Lara Dutta and Tere Mere Phere, directed by Deepa Sahi. The man’s certainly on a roll!