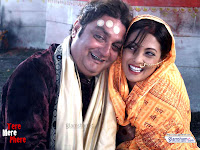 Starring: Vinay Pathak, Riya Sen, Jagrat Desai, Sasha Gordia
Rating: *
Tere Mere Phere’s tagline ‘the honeymoon begins’ is perhaps the only joke associated with it that will make you laugh out loud if you happen to look at this romantic comedy’s poster after watching the film.
Otherwise, the entire two and a half hours tests your patience in a way that you are just short of pulling your hair off, like its lead pair who never seem to miss a single chance to pull each other’s. Alright, we know that men and women are different species and are meant to fight once married. That’s certainly a justifiable premise for a rom-com exploring a fun take on how things take an overturn between a couple after marriage. But Tere Mere Phere will never be forgiven to enter this domain. Purely for its choice of already screechy actors getting a chance to shrill like nobody’s business in the name of fights. And no, we aren’t referring to Vinay Pathak here.
It’s tolerating newcomers Jagrat Desai and Sasha Gordia on screen that makes you hope that the censor board seriously considers ‘bad acting’ as one of their criterions to not pass a film in future!
Rahul (Jagrat) and Pooja’s (Sasha) honeymooning idea is sure interesting as they drive through the Himalayas in a caravan but their supposed adventures that unfold during this journey are anything but that. Jai (Vinay) being a brief part of it doesn’t help too as he gets on the caravan with the two shriekers to reach in time for his marriage to ladylove Muskaan (Riya Sen, thank god for just the special appearance) before her family of goons set them apart.
Acting is not the only issue with Tere Mere Phere, even though its one of the major ones. Everything else from writing, direction, screenplay and editing falls flat too with sheer lack of coherence in any of the departments. Sample the dialogues: An angry Rahul shouts at Pooja after a fight, “Tumne mera phone paani mein daala?” Pooja gives an ‘obviously yes’ expression to which Rahul says, “Ab yeh chal nahi raha.”
It’s unnerving to sit through constant jabbering like this and we pity Vinay struggling to justify his presence amidst such nonsense. The only saving grace is perhaps the film’s backdrop set in the breathtakingly beautiful Himalayan terrains.
Cinematography does provide some relief on an occasional basis but we expected a lot more from Deepa Sahi’s directorial debut, a talented actress who’s produced Mangal Pandey: The Rising and written Oh Darling! Yeh Hai India prior to this.