My Week with Marilyn movie review 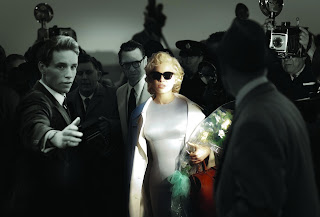 They say filmdom is a cruel place to be in. There’s an eerie darkness behind those lights and camera…all that glam and glitter! That’s probably why there have always been tragic stories of magnificent faces on the silver screen crumbling down into ashes in no time, off it.
There’s been an amount of mystery surrounding shocking revelations about lives of actors and actresses, especially the latter, who despite being reigning queens of their time, ended up with brutal ends. Was it just their arrogance and eccentricity that made their personal lives non-enviable? Or was it only limited to the pros and cons that the profession brought with it?
My Week with Marilyn clears many misconceptions along with answering a lot more than the above questions. It gives us a ‘behind-the-scenes’ tour of one of the films of a model-actress-singer-showgirl, who was an icon in every sense of the term. And through a biographical account of a week from her life, the film actually sums up her entire journey as a person and professional.
Colin Clark (Eddie Redmayne), the 20 something third assistant of director-actor Sir Laurence Olivier (Kenneth Branagh), narrates his close encounter with the 30-year-old Marilyn Monroe after getting into a brief affair with her on the sets of The Prince and the Showgirl (1957). The actress was in her prime then but something kept her from enjoying the limelight. She constantly needed her drama coach Paula Strasberg (Zoe Wanamaker) to strengthen her belief in herself, to remind her that she was a great actress.
A woman who was and still is an inspiration to many, including Olivier (who returned to acting from direction after seeing her perform in The Prince…) wasn’t even aware of the talent she possessed. All she yearned for was love and protection, even though every single man in her proximity was in love with her. Her words when Clark referred to her as a goddess once: ‘I am not a goddess. I just want to be loved as a regular girl. Do you love me?’, bore the deprived feelings of a celebrity, who had everything and yet, nothing.
Director Simon Curtis picks up precise details from Clark’s two books on Monroe and gives us an enlightening peek into the make-believe world of films. Where everyone from the ones on top to the ones who have been on top are laden with insecurities.
Olivier says in one scene: ‘Acting is about truth and if you can fake it, you will have a jolly good career.’ And the film shows how in an attempt to do that, many like Monroe struggled to keep in touch with their real selves.

Michelle Williams as Marilyn is ace in portraying the pain, confusion and conflict of the actress’ personality. She brings out the vulnerability and charm of the star with such aplomb that you hope she grabs the Oscar for Best Actress tomorrow (with all regards for Meryl Streep). To add on to that, Curtis’ attempt to keep things as real as possible works wonders for the film. Right from shooting at the same ‘Pinewood Studios’ where The Prince… was shot to making Michelle wear the same costumes that Monroe wore in the film.
With Monroe’s highs and lows at the centre, My Week… conveys that public figures are ironically forgotten humans, stardom camouflaging their natural tendencies and needs.