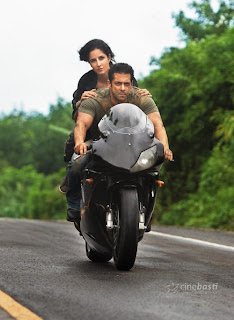 Yash Raj may always be associated with passionate romantic tales, comprising of song, dance and plenty of drama (and melodrama) but there’s no denying that the production house is equally good with no-brainer actioners --- Dhoom series, Tashan and now Ek Tha Tiger.
With Ek Tha Tiger though, Kabir combines action and romance a la Mr & Mrs Smith style, making an exciting chase for a love story, which leaves aside emotions and takes you on a high-end adventure trip --- starting from Iraq and ending in Cuba.
The love birds in question here are RAW agent, Tiger (Salman), the heroic spy who has no life beyond his death-defying missions. And the damsel in ‘action’, Zoya (Katrina), who boxes as effortlessly as she moves her belly. A globetrotting chase follows after the two fall in love...
Ek Tha Tiger starts off as a hardcore terrorist thriller and slips into a full-blown rom-act(ion). The story reminds you of Veer-Zaara, ofcourse a more hip, non-dramatic and illogical version. Some sequences are downright outrageous in terms of ‘non’sense. But since Salman has vowed to be the Rajnikanth of Bollywood, you might as well see him stopping a speedy tram with his blazer this time round.
He’s every bit the macho-man that one expects him to be post Wanted, Dabangg, Ready and Bodyguard. But despite his consistent popularity, flair for action and a natural chemistry with Katrina, Salman doesn’t impress in this film. The actor has developed a strange deadpan expression and hardly ever goes beyond that, even in the most intense of scenes. We don’t know if it’s his illness that’s to blame but in this film, he certainly seems to require some effort to flash a simple smile too.
So even if Salman is responsible for making all the big bucks for yet another film, it’s Katrina who’s actually the highlight of Ek Tha Tiger. The Barbie doll truly transforms herself from a mere eye-candy to a kickass action heroine in this one. She’s never looked so hot and played so tough! It’s such a treat to watch her on screen that you are willing to overlook all the other flaws --- drab screenplay, shallow plot and forgettable music, barring the catchy Mashallah.
With Ek Tha Tiger, Kabir single-mindedly concentrates on action and cinematography, and does well in both. So don’t go expecting anything more than a pacy action-packed escapade amidst beautiful locales.