Student of the Year: Movie Review 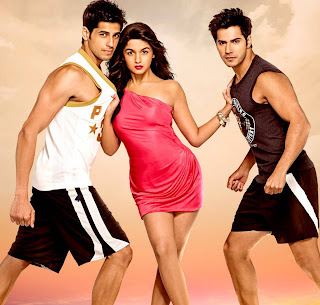 Everyone knows how much Karan Johar believes in candy floss cinema. And how he loves a hearty quotient of glamour in his movies. Hence, when he spoke about Student of the Year (SOTY) being his fantasised version of school life... a fragment of his aspirations as a teenager, we expected a different magnitude of the ‘Richie Rich’ world in this film.
But KJo not only falls short in seducing you with picture perfect people in idyllic surroundings this time round – barring the quintessential few frames of course – he also seems to have taken a leap from having excess emotion in his films to no emotion at all with this one. There is not an ounce of novelty or imagination in the creation of this high flying Saint Teresa school, which is brimming with students who flash their uber coolness solely through skimpy outfits and bare hot bods.
In Jaane Tu Ya Jaane Na style, SOTY is a film in flashback. The teens from Saint Teresa are now grown-ups reflecting on that one competition in their last year of high school, which turned best friends Abhimanyu aka Abhi (Siddharth Malhotra) and Rohan (Varun Dhawan) into foes for life. One, an ambitious middle-class boy and the other a neglected brat of a business tycoon, the best buddies war over their same love interest Shanaya (Alia Bhatt) and use that hatred against each other to compete for the ‘Student of the Year’ title. Does Karan Johar get more innovative than that? Not really. He also makes the most coveted competition of the school boil down to a silly game of treasure hunt.
What’s even more annoying is the non-stop recycling of characters and situations by Karan from his previous films. SOTY is a bad mishmash of Kuch Kuch Hota Hain and Kabhi Khushi Kabhie Gham and maybe Kal Ho Na Ho and Dostana too. While there’s the child artiste Sana Saeed from Kuch Kuch... making a comeback in a slutty teen avatar, Shanaya is just another version of Poo from Kabhi Khushi... (played by Kareena Kapoor), minus the wickedness and zing. And the references continue.
The brighter side though are the two poster boys. Karan makes his leading chocolate boys Siddharth and Varun fantasies of every teenage girl. They are drop dead good looking even though the filmmaker doesn’t take much effort to infuse life in them. The film hardly ever allows them to be anything more than mere eye-candies. Ditto with Alia, who plays a perfect baby doll, nothing more nothing less. Boman Irani’s son Kaizaad makes a wasted debut too. He shows sparks as an actor in his portrayal of a geek but gets lost in the film’s indulgence with glam and glitter.
That’s the biggest drawback of SOTY. It ends up being a film sans a heart. Thankfully, Vishal-Shekhar’s peppy numbers bring in an eclectic youthful charm. Disco Deewane and Vele especially, set the screen on fire with groovy choreography and energetic music.
But the exciting part about SOTY is most definitely watching Rishi Kapoor do the gay act. The principal with pink polka dot ties takes the cake with his hilarious one-sided love track with the football team’s coach (Ronit Roy). Otherwise this one’s a dud all through.