If I had nine more lives, I would spend them in India: William Dalrymple 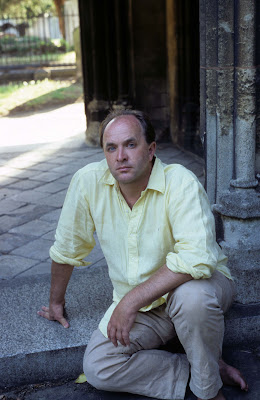 He has spent all his life in India and calls himself “a good farmer in Mehrauli”, an ancient city on the outskirts of Delhi. A Britisher, whose books have been the gateway to India, William Dalrymple’s love affair with the country is an epic one. The internationally acclaimed historian and writer has taken the world on an exhilarating Indian journey through his books City of Djinns, Nine Lives and The Last Mughal, The Fall of a Dynasty, Delhi 1857. He now presents an account of the First Anglo-Afghan War in his latest work Return of a King – The Battle for Afghanistan.

On his visit to New Zealand for the Auckland Writer’s and Reader’s Festival, Dalrymple spoke on the origin of his romance with India and why he can never call himself an Indian.

How did your fascination with the East begin?
I had nine months to kill in India with a friend while I was on my way to Iraq to become an archaeologist. I was very untravelled as a child. Like most Diaspora kids, it was pretty much from airports to airports for me. Hence, India was a complete shock to my system. I couldn’t understand where I was and what was happening. But I fell in love with the place.
Like every love affair though, mine has gone through its ups and downs too... the traffic, MTNL (Mahanagar Telephone Nigam Limited) (laughs). But if I had nine more lives, I would spend them in India.

Despite adapting to an Indian lifestyle after nearly 30 years, you have been very clear that you can never become an Indian. Why is that?
Yes. Despite living in cotton pyjamas and having dal/rice for lunch, I don’t call myself an Indian. I will always be a Brit.
India has clear sets of identity. It has a very strong ethnicity that I can never fit in. My great great aunt was a Bengali. Then I discovered one of my distant family members – James Dalrymple – is buried in Secunderabad (Hyderabad). My kids are born and brought up in India. They speak and write Hindi but they can’t be Indian.

As an Englishman then, has your personal history ever come in the way during your extensive exploration of India?
I did come with a barrel of preconceived notions. I remember before I came to India, Salman Rushdie’s book Midnight’s Children had just released among a few other works on the country, like the film Gandhi. So my perception about the place was mainly that of Utopia and snake charmers (laughs). But the country just got more and more diverse and complex as I started exploring it. I was always very interested in Eastern religions but during my course of research, I realised that India is a subject, which has been misrepresented by Western writers. The image of India and reality is completely different.

As a writer, do you think it is important to live in a particular place one is writing about?
Yes it is. When I was away during the periods in mid ’90s, I found myself speaking with less authority. One is removed from reality. I have observed the same about Indian writers writing from different parts of the world. One gets the sense that these writers are living off a diminishing perspective and writing about an identity which they no longer know about. But for fiction writers, it is a different ball game as they are creating an imaginary world. So we have Salman Rushdie writing from New York, we have Amitav Ghosh writing about Uttar Pradesh from NY and others.

You said in an interview that you “vaguely have a kind of well-educated and non-specialist British reader in mind” while writing and that 60 percent of your books are sold in Britain. Have you ever found the need to shift focus to Indian readership?
My books have been amazingly international. Nine Lives got translated in 40 languages. It was ridiculous! But I think my first book In Xanadu was catering to Brits whereas Nine Lives was mainly loved by Indians. Brits didn’t get it and Americans liked the book for its mystic element. Going back to your question, I explain less and less now. I assume that my reader knows about India or is an Indian.

You also said that the 19th century Delhi appealed to you for its Urdu poetic creativity and in a romantic sense, it was a much more powerful city than the modern one. All the same, you admitted that you are very fond of the modern Delhi too and it is your favourite city. What is about the capital in the present that draws you in?
I am the majority of one to think of Delhi as my favourite city. People think of me as some sort of a crazy person (laughs). But I love Chandni Chowk, I love Daryaganj, I love the Civil Lines... I love the fact that Delhi has so many different feels.

Do you choose the settings for your books or the settings choose you?
I choose my settings because it is very crucial to get it right. It is important to weigh up your interests while writing a book according to who will be interested in reading it. If you are investing four years into something and it goes wrong, you have to live with it for the rest of your life. So there is a huge element of gamble as a writer and I am always nervous and uncertain before writing a book. Also, I do not want to repeat myself. Hence, after three big history books, I would now like to go back to travel writing for my next work. I am also working on a project related to Pahari art.

As someone who is always in search of the past, how easy is it for you to live in the present?
My official designation by the Government of India is of a foreign correspondent. I keep myself going by writing for newspapers. I am very much interested in contemporary India, politics, international relations, etc. My current areas of interests are Pakistan and Afghanistan – the two centres of destabilisation.
India is relatively so settled. I am very worried about Pakistan. It has been the casualty for all that has been happening in Afghanistan. Afghanistan is a proxy war between India and Pakistan and it could well be the new Kashmir.