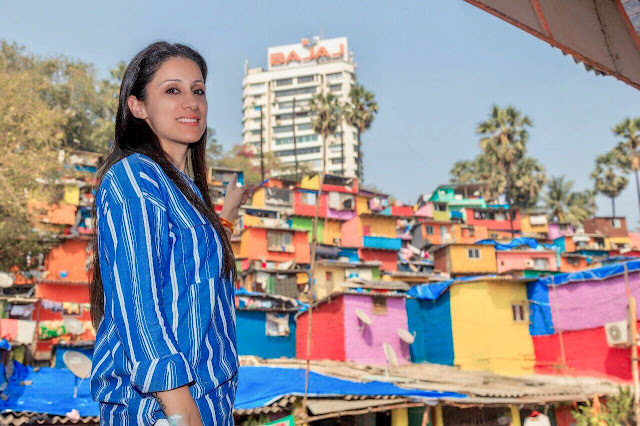 Seven years ago, an artist came forward to start a drive of beautifying the city of Mumbai. She took her art to public gardens (pop garden at Worli Sea Face) and onto the streets (installations in Bandra), initiating the unheard concept of ‘public art’ in the city. Now, we suddenly see the once dingy slums of Mumbai popping up like colourful hamlets everywhere, thanks to that very artist. 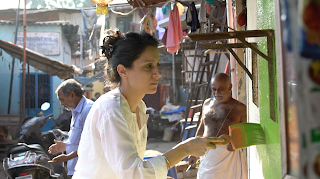 But Rouble Nagi is not just an artist, who is spreading beauty with her fabulous makeovers of the supposed ugly pockets of the city. Instead, she is quite literally giving a new lease of life to the underprivileged with the strokes of her brush.Whether it’s Dharavi, Jaffer Baba Nagar or the Dhobi Ghat, Rouble is bringing about an exemplary transformation that she has aptly named the ‘Misaal Mumbai’ project. She is as much a passionate artist as much as she is an active humanitarian. In an intense exchange, she shares her fulfilling journey of combining her two loves – art and social work.


THE SEED IS SOWN 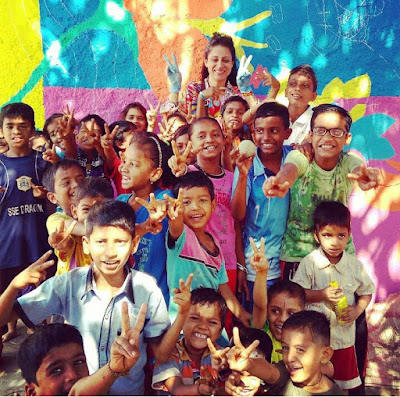 “I have been teaching art in the slums for almost eight to nine years now. The first day I entered the area, I didn’t like the way people lived there. So along with conducting my art classes, I would always think what more could I do to make the surroundings better. It’s not like slum dwellers are not happy. Despite terrible living conditions, they are happy. But I wanted to bring colours to their life and add more happiness through art. So I started with painting Dharavi. What followed was Jaffer Baba Nagar in Bandra and it continues with more than 13 slums in our kitty,” Rouble narrates.

In a city like Mumbai, which throws numerous challenges on a daily basis for its townsfolk to get past their routine lives, Rouble set out to achieve a feat, which not only involved changing the face of slums but also people’s mindsets. What were the challenges like? “A lot of people advised me against it, saying slums are dark and dangerous. But I have lived there for so many years. I don’t think they are dark and dangerous. There are apprehensions and fear because there are all kinds of people living there but then there are all kinds of people living everywhere. So why are we judging these people just because they are living in slums?” she questions empathically.

There was an initial roadblock though with slum dwellers coming up to her and asking whether she had come to acquire their land. They then went on to beg for money to pay off their children’s school fees and ration instead of painting the walls. “That’s when I explained to them that it’s not just about beautifying their walls. I wanted to waterproof their house during rains. I wanted to repair their broken roofs. I said we will also try and build some toilets as clean water is already there. We will pick up all the garbage. It’s about having a cleaner neighbourhood as they continue to live here. That’s when they started understanding that ‘oh my god, she’s here to give and not to take’,” the game changer recounts.

For Rouble, ‘it was always about people and doing something for them and not about how good or bad they are going to be to her’. “In these areas, people are used to having people come over and make empty promises. So it’s very normal for them to have these questions as that’s the experiences they have gone through. But I also know for a fact that when you are genuinely trying to do something good for people, they will come around and listen to you. And the day you can get them to sit and listen to you, you have won the battle. So we worked our way up. It wasn’t a cakewalk but it wasn’t too tough either as I was very clear that I am here to make a connection with people,” she reveals. 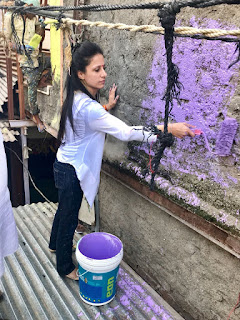 In an attempt to form a connection, this artist has gone on to paving a way into people’s hearts. “I have a huge extended family now. I worked towards forming this bond and the kind of love we have received from everyone in return is amazing. I feel happy as an artist, as a human being and as a woman. Also, I have a few thousands growing up artists with me,” she states, sharing how she got youngsters and women from the respective slums to paint along with her team. “It was very important to have community involvement to arouse a certain sense of ownership and value in them. Getting them to paint the walls with me was the only way of getting them to maintain it in my absence. So I made sure three people from every lane were there with us,” she says talking about her team of painters, which also comprised of volunteers from colleges, working professionals, artists and others. 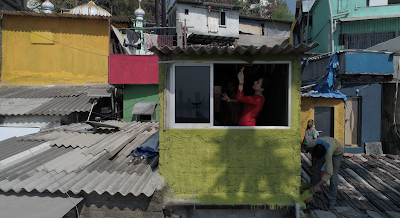 “It’s been a fantastic turnout. I also made one person the head from every lane, who would be responsible for the maintenance of cleanliness and hygiene – the dustbins not being stolen, everyone putting the garbage in the dustbins, no spitting on the walls, etc,” she informs. It is a holistic approach for Rouble when it’s bringing about change. “We do a lot of skill development classes along with my art, especially with the youth. There are these two kids Karan and Arjun from Shivshakti Nagar, who are choreographers and wanted to teach. We found some way of giving them that exposure. I also employed three boys from one of the slums, who are volunteering with us now. As an artist, I guess I am born to do whatever I do through colour and art. But social work is also my interest. And when I do it through art, it becomes much more pleasant,” the crusader, who also works towards the cause of education through her Rouble Nagi Art Foundation, continues.

And nothing stops her from making the experience pleasant, even if it’s telling her friends from the social circle to leave their sanitisers behind if they want to come paint with the rest. “The tagline of the project is ‘equality, not charity’. We are here to help and support as many as we can in our capacity,” she clarifies.

With social initiatives as significant as Rouble’s, one thing that generally becomes a dampener is the sustenance of it all. How does she see that happening?

“With respect to maintaining hygiene standards, there has been a big change. If you went to Worli Koliwada on the first day, you would be shocked because everybody was sitting and shitting outside. Now also they are, but the number has reduced by 60 percent, which is a blessing. We started around 16 new toilets there, which were made but closed. So we are reopening them and repairing them. I got the whole team of BMC (Brihanmumbai Municipal Corporation) involved there, including the BMC commissioner. The government has now made it compulsory that everyone has a toilet in their house and the work will now start on that. So yes, maintenance is never going to be easy. If I expect that there is no garbage thrown on the streets there, I would be fooling myself. But to even come to 60 percent lesser is a lot to achieve and I am sure we will achieve that 40 percent also in the coming days,” she says, her voice echoing confidence.

As for the artwork on the huts, she says, “Vandalism is huge in our country. I have had so many of my public installations broken. But for this project, I have tried my best to use colours that would last at least for the next two to three years.I have used premium colours and all the strainers were made by me. I have mixed my own colours.” The walls of the huts were nothing less than a canvas for Rouble, who took pictures of the huts, sketched them out and painted them in her studio, before starting with the colouring on site. “It’s not just about taking a roller and brush and start painting.It was a thought out thing, that each wall should have a character. Each wall became like an art piece. So that when you see the area from a distance, you see a beautiful, abstract canvas. Also, because people are living in those houses, we made sure we kept them in the loop about their likes and dislikes as well, with respect to colours and designs,” Rouble explains.


EVOLUTION OF ART: FROM ART GALLERIES TO PUBLIC SPACES

“During the inauguration of my ‘Paradise Garden’ outside Mehboob Studio last year, I had said that for me, art is not to be kept in a museum alone and it is not only for the elite. Especially public art, as the term clearly suggests, is for people. It is for people to enjoy.

When I started the Mumbai beautification drive, there were hardly any sculptures in public areas. Hence, when I set out to do my first installation in a public space seven years ago, I had invited so many of the so-called artists to create installations with me and get the required permission from the government. These were artists who were far more senior and bigger than me at that time. But none of them came forward. Probably because it wasn’t a paid project. And today, they are dying to get these spots and put their sculptures out there as it’s branding for them now,” Rouble tells us. 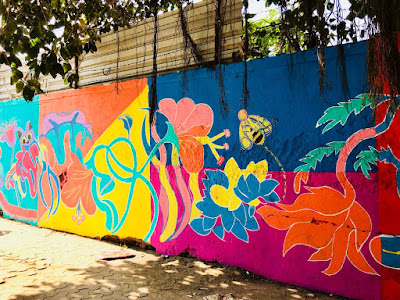 Art on the whole has evolved immensely. “Few years back, people were not aware of art. Today, Indian artists have gone international. A lot of people want to become artists now. But you have to have your heart and soul into it. You can’t use your mind too much. When you are creating, you have to create with your heart,” she insists. Apart from ‘Misaal Mumbai’, she is busy creating nine public installations for different cities. She is also excited about creating an artwork for a royal family in the Middle East.

“A big plus for an artist is that age is not a factor. In fact, the older you get, your art is appreciated more. So even at 80, you can continue working,” she signs off, hinting at her long innings.