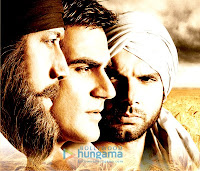 It’s easy to call a film a tribute to something but difficult to capture the required essence of that particular subject and making it worthy of a tribute. Kisaan fails in all aspects of being termed as ‘a humble tribute to the real heroes of our country…. The Farmers’ ---- as the note appears at the end of this disastrous and a rather shallow attempt at portraying the life and struggle of farmers in India.
Instead of being a message oriented film and highlighting the issues of farmers, Kisaan boils down to a mere clichéd family drama revolving around a farmer and his two sons. With stereotypical characters, plastic performances and random direction, this Sohail Khan production is nothing but a howling bore! Considering the poor plight of farmers, ‘Kisaan’ Dayal Singh (Jackie Shroff) decides to send one of his sons, Aman (Arbaaz Khan), to the city to study law while raising the other one, Jigar (Sohail Khan), to become a farmer like him.
So whereas Jigar is your all so strong and traditional Punjabi kuda, who brutally cuts the hand of the person having slapped his father and breaks the car, dodging his girlfriend Titli (Nauheed Cyrusi), into pieces, Aman on the other hand is the sophisticated, educated and modern boy smitten by the glitter and growth of the city life. So you have the former as the ‘idealistic son’ and the latter as the ambitious one, who is more into climbing the career ladder rather than being interested in the zameen talks of farmers.
Owing to a theme and characterisation as rampant as this, there is very little you can expect from Kisaan. Barring a few action sequences, one struggles to find any strong points in this carelessly made film. Even the action gets really gory and disturbing after a point. Among the many drawbacks, the most annoying factor is how violence has been shown as the symbol of strength. It’s irritating to see Dayal Singh basking in pride every time his son Jigar goes and knocks someone down. As for performances, Dia Mirza as Priya is the only convincing one of the lot. In a pool of caricaturish characters, hers emerges with a somewhat realistic edge.
Even though Sohail, Jackie and Nauheed contribute something to their overtly run-of-the-mill characters, it’s Arbaaz that literally comes a cropper. It’s high time he realised that he is not meant for the screen. He neither has the looks (mark his awkward wig and wrinkled skin) nor the acting talent. Sadly, director Puneet Sira seems to have completely missed the finesse and nuance that shape up a film. Nothing, including the music, works for this farmer tale gone horribly wrong!