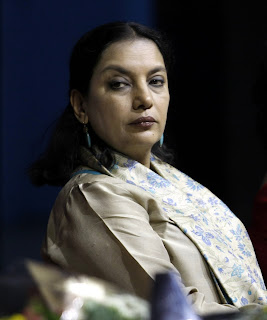 Shabana Azmi has been accused of being temperamental, moody and rude at various intervals and we got a first hand experience of the intense actress/social activist’s temper when she was in Pune to attend a World Women’s Day Programme. There was pin drop silence amidst the hush-hush of hordes of cameras, recorders and mikes hovering around Shabana, when she suddenly threw a fit at all the media channels who were more interested to know about her thoughts on eve-teasing and after effects of bhang during Holi rather than women’s day. After giving a few brief quotes, she dismissed all the mikes and cameras in front of her and slammed the typical behaviour of the electronic media, who is always preparing news for their benefit and not concentrating on the event.
Though her anger was only fair, it was alarming enough that she wouldn’t talk any further. After patiently waiting outside the VIP room for a good amount of time, the struggle finally ended when she agreed to speak for a bit. “I don’t understand why the media has to talk about everything irrelevant and conveniently ignore the importance of an event like this?” she roared. Well, we certainly didn’t have an answer to that question but we decided to deviate the conversation to perhaps her favourite topic --- films. Mention the kind of praise Zoya Akhtar’s Luck By Chance has garnered and Shabana joins the praising bandwagon. “Zoya has indeed made a beautiful film and the most striking quality about her is that she had the patience and courage to stick by the script for seven years,” points out the actress.
The current trend of movies has proved the fact that age is no more a restrictive factor for senior actors in terms of roles, especially the ones in the league of Shabana. While we just saw Naseeruddin Shah pulling off an entire film (A Wednesday) on his shoulders, does she think that this flexibility and openness exists only in the case of male actors in the industry? “Ofcourse not. I have done some of the best films of my life in the last 10 years whether it was Morning Raga, 15 Park Avenue or Loins of Punjab Presents. And I am very excited about my part in Gurinder Chadha’s upcoming film It’s a Wonderful Afterlife too,” she responds. Gurinder Chadha’s latest venture has Shabana portray the character of a typical Punjabi mother based in Britain, who is on a hunt for boys for her daughter.
Talking about the sexual representation of women on screen post films like Dev D, Shabana, who was one of the protagonists of the controversial film Fire, says, “It is very important that the male gaze towards women changes and it’s high time. And this change should be brought about through images and role models of women themselves.” One interesting aspect about an intense actress and social activist like Shabana is also that her off screen persona as a woman itself is so strong that it mostly has the risk of overcoming her characters on screen. To which Shabana disagrees, “My work outside and in movies is not different. I only take up work that I can personally relate to.”
As the chairperson of the NGO Nivara Hakk, which works mainly for the betterment of slum dwellers, Shabana can’t be happier that Slumdog Millionaire has won the Oscar. “I liked Slumdog… and what is more important to me is that this film would help shed prejudices about people living in slums, the ones living in the face of adversity,” she signs off.