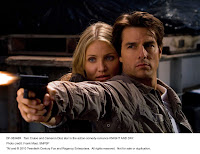 
When somebody like director James Mangold, who has finesse for drama (Cop Land, Girl, Interrupted, Walk the Line, 3:10 to Yuma), sets out to make a comic-action caper with Tom Cruise and Cameron Diaz in the lead, there is bound to be some curiosity around the film if no expectation. No wonder Knight and Day has been one of the most awaited releases of this week. Even though it doesn’t justify the wait completely.
Riding solely on the credibility of its starry duo, this adventure of Roy aka Knight (Cruise) and June (Diaz) isn’t convincing but is entertaining nevertheless if you watch it keeping logical reasoning aside. June is on her way to attend her sister April’s wedding (a calendar family), when she inevitably becomes a part of the mission alongside undercover CIA agent Roy to save a Duracell-like Zephyr from the bad guys. Created by Simon (Paul Dano), Zephyr is a battery which can apparently power an entire city and Roy has to protect not only the metal but also its inventor.
This chase results in Roy and June jumping from one country to another amidst constant shoot-outs, the latter forever being in a drugged state. Oh, Roy drugs June claiming she’s ‘not being able to cope with events’. So every time she gains consciousness, she finds herself in a new place and attire, apt for the time and place. She wakes up wearing a bikini on a tropical island in one scene and formal winter wear on a luxury train in Austria in another, thanks to Roy who specialises in dressing and undressing people with the help of some pin and…. by looking away ofcourse. Funny? Not really.
Knight and Day was promoted as a globe trotting adventure but you never get a feel of any of the beautiful spots that the lead pair is traveling to. Whether it’s the island off the grid, Alps, Germany or Spain. Also, the comedy is restricted to Diaz alone. She is perhaps the only one who makes this flick watchable with her superb comic timing. Cruise, on the other hand, is dishearteningly disappointing barring a few instances which give a glimpse of his trademark charm. Otherwise he keeps a straight face throughout and concentrates mainly on getting the stunts right. After sharing screen space in Vanilla Sky, this is the second film of Diaz and Cruise together. But there aren’t any sparks flying in here. The awkwardness and sillyness in the romantic parts between the two are unmistakable. Mangold has shown a flair for rom-coms with Kate & Leopold but the romance just doesn’t work here.
The action sequences are shot slickly but that’s about it. There’s nothing exceptional that we haven’t seen before. Knight and Day boils down to being a joy ride, which is enjoyable at one point and irritatingly bumpy at another.