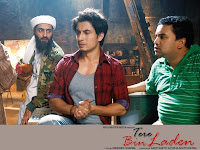 Making a satire is no joke. But Abhishek Sharma has made one out of it. His directorial debut Tere Bin Laden is a sheer mockery of the genre, being more of a harmful instigator than a satire on America’s political ideologies.
Ali Hassan (Ali Zafar) is an ambitious news reporter from Karachi, who harbours dreams of making it big in America. After constant rejections of his visa, he shoots a fake Osama Bin Laden interview as breaking news scoop with an Osama look-alike Noora (Pradhuman Singh). Ali convinces Noora, a chicken farmer, to do the video by terming it to be a publicity clip for his farm. But the video, on the contrary, features Osama lashing out at Americans and ends up inviting flak from US who sends its official Ted (Barry John) to hunt down the ‘terrorist’. How Ali and his team --- Noora, a cameraman, a RJ/mimic of Osama and a make-up artist --- escape the dangerous repercussions of this act forms the rest of the story.
Tere Bin… adapts an irreverent Punjabi tone like Khosla Ka Ghosla but lacks the finesse and intelligence of the latter. What’s annoying is the irresponsible approach of this film towards a relevant issue. There is nothing wrong in spoofing on America’s functioning… the portrayal of its role in bombing Afghanistan and its disruptive world politics in general, but Sharma sure owes a justification in glorifying the other party by making Osama out to be a peace lover in the end.
Instead of making you think in a lighthearted manner, this film shocks you with its shallow treatment and literal humour. Barring a few nice punches, there is an overdose of kukkad and kukkadi jokes, which make things too obvious and repetitive to generate laughter. It’s true that you are laughing nevertheless throughout the film but not on the jokes….on the foolishness of its makers. There’s a scene which has Noora crying for his life with a bomb glued to his hand. The situation is rather serious as you feel he would die any moment. Just then, his pet cock Sikander flies through, taking the bomb from his hand and blasting himself.
The fondness of Noora for his martyr pet is shown from the beginning. But just when you feel bad about the blast, there’s a chicken tandoori leg flying out much to the amusement of the cameraman as he picks it up to eat it. This trivializes the slightest emotion that perhaps exists in the film. There comes a point when you feel like a fool yourself to be enduring such nonsense in the name of comedy. And amidst all this, the peace message, which the film tries to convey, is conveniently lost.
The setting, on the other hand, proves to be an upside as the film is shot majorly in Karachi. So you get a feel of the ethos of the place and its people. The actors contribute fairly too. Pradhuman as Osama is the best of the lot. Ali Zafar, however, is quite average. The ‘prince of pop’, as he’s known in Pakistan, is better off as a musician than an actor. Barry John plays his part convincingly.
We know logic and sanity can’t be expected from a film like this, but what about entertainment and a little thoughtfulness? Disappointingly, Tere Bin Laden has none of it.