In the mood for love: Riteish Deshmukh 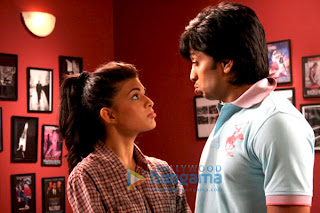 After playing lover boy in his debut, Tujhe Meri Kasam, Riteish Deshmukh is back in the avatar of a romantic hero with Jaane Kahan Se Aayi Hai after seven long years. But he doesnt see this time gap as a hindrance. “Better late than never,” he says optimistically. We agree, especially owing to the twist in this upcoming love tale. Instead of the girls on prithvi, Riteish will be seen serenading an alien from Venus this time round. And the actor says that he thoroughly enjoyed the experience. “It was great romancing an alien since women on earth anyway don’t pay any heed to you,” he laughs.
Before we raise our eyebrows on that statement, he quickly clarifies, “I am not referring to real life but my character, Rajesh Parekh, in the film. Whichever girl he proposes says no to him. No girl wants to be with him. He is the unluckiest person in love.” In a peppy mood, Riteish goes on to express his delight in doing a full-fledged romantic film after doing multistarrer comedy flicks all this while. “It’s amazing to play a lover boy again. You get a chance to romance all your actresses on screen, which is not possible otherwise,” he jokes. We aren’t sure if that’s an impossible feat but well…!
So what can one expect from Jaane Kahan Se Aayi Hai, we ask? “Freshness,” comes the prompt reply. “I think a love story works on the basis of its simplicity and core emotions. Atleast that’s what I expect from a romantic film when I go to watch one. You should urge for the boy and girl to come together throughout and get that feeling when they actually do in the end. The film should have poetic justice. And Jaane Kahan… has all of that. It is nicely written and executed well. And above all, it’s fresh in its treatment,” Riteish explains.
Jaane Kahan… is a debut directorial venture of writer Milap Zaveri, who is also a very close friend of Riteish. But for the actor, once the film started, Milap ceased to be a friend and took over the role of a director. “Every actor should get the experience of working with a brilliant director like Milap. What he has achieved with his first film, most people can’t achieve after a string of films too. Besides, he is someone who is really capable of making a film like this. He is by far the most romantic person I have ever known. You will get diabetes if you start listening to his love stories. In fact, under the guise of Rajesh Parekh, I am actually playing Milap in the film. And whenever I realised that during the film, I didn’t want to play the character anymore,” he narrates amidst bouts of laughter.
The film also stars Jacqueline Fernandez, who plays the alien and Riteish’s love interest in the film. After Aladin, this is the second film of the duo together. Ask him about the experience of working with the ex Miss Sri Lanka and he suggests, “You know, you should ask Jacqueline instead about who her favourite co-star is? She won’t have a choice but to say my name as she has done only two Hindi films and both are with me.”
On a serious note, he adds, “Jacqueline is a wonderful human being. She brings a lot of happiness to the sets and Milap likes her a lot for that reason. Another quality about her is that she talks to everyone on the sets --- right from the spot boys to the others. As for the film, I think she suits the role of Tara perfectly.”
Before bidding goodbye, Riteish dismisses rumours of him doing Dostana 2. “I am not doing Dostana 2,” he signs off.