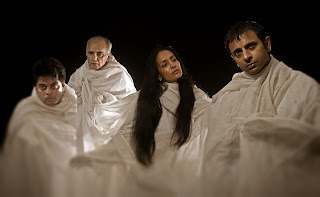 Taken from Shakespeare’s Macbeth, the title of Lilette Dubey’s latest play, Brief Candle, suggests the temporariness of life. The plot of this theatrical piece is layered with a number of parallel stories of each of the characters running through it, switching frequently to the past and present mode.
The setting exposes one to a hospice nursing cancer patients, where the staff and patients are busy preparing for the hospital’s Founder Day celebrations. They choose to enact a play written by one of their inmates, Vikas (Zafar Karachiwala) who died of Aids related Cancer. The storyline of the play revolves around characters stuck in a hotel room near an airport due to a storm causing delay in their flights. As a result, they find themselves getting entangled in complicated love affairs and secret dawdling with each other.
As the staff and patients start rehearsing the play, they realise that they are playing themselves and that the story of their character is their own. The script of the play not only brings Vikas alive again in the form of memories but also unfolds an unrequited love story between him and Dr Dave (Manasi Parekh). One aspect that both writer Mahesh Dattani and director Lilette Dubey deserve an applaud for is a terrific mélange of a variety of genres in this play. Brief Candle has farce, drama, music, tragedy and a silent message that delves into the psyche of people suffering from life threatening diseases like cancer, all weaved in wonderfully. But again this blend does bring in a certain complexity and makes the play slight disturbing and depressing after a point, despite its share of funny moments.
Playing mainly upon the emotions of each of the characters, Brief Candle, as required, showcases a strong thespian quotient with some power packed performances. It brings together some of the finest actors like Amar Talwar, Suchitra Pillai, Joy Sengupta, Zafar Karachiwala and Manasi Parekh from the theatre and television world. Not forgetting the surprise package among the cast, Satchit Puranik, the director of the film Mr Ya Miss. His incredible comic timing provides the much needed light heartedness in this otherwise intense and serious drama.
Brief Candle explores territories indulging into the ruthless face of irony and the circle of life and death, which nobody can escape. Likeable, if you are game for a heavy dose of drama.