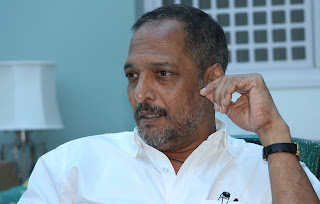 Nana Patekar may be known to be short tempered and volatile in nature but when we met him, he came across as a different person altogether. With a casual air around him, the fun-loving Nana was nothing like his formed image. Aware of his whimsical reputation, the actor/writer/director admits without any qualms that he is prone to fights. “I keep fighting with everyone in the industry. In fact, there is hardly anyone with whom I haven’t fought lekin dushmani kisi ke saath nahi hain,” he smiles.
He further justifies the reason for his constant quarrels. “If you ask me to do something I am not convinced about, I would have every right to question your stand. I may not always think like you. And come on, you can’t be goodie-goodie all the time. Atleast I can’t,” the angry old man says on an honest note. It is this ‘convincing’ factor that prompted the actor to be a part of the upcoming film Tum Milo Toh Sahi, which explores the concept of love at different stages of life through three love stories.

Directed by actor-turned-director Kabir Sadanand, Tum Milo… will have Nana and Dimple Kapadia sharing screen space after Krantiveer. Ask him about his character in the film, which is supposedly very unlike what he has done before and the actor shrugs the topic off! “Forget that. I don’t sign a film on the basis of my character. For me the script is more important. What you want to say through the film is what matters to me. And I really liked what Tum Milo… wants to convey,” he clarifies.
After the intense and issue-driven film Prahaar, which was written and directed by Nana (who also played the lead role in it), the versatile and multitasking artist is all set to don the director’s hat yet again after a gap of nine years. But this time, he is in the process of making a feather light love story. “It’s going to be something on the lines of Roman Holiday. The entire setting of the story is in a fort, situated right in the middle of the sea,” he informs. So whom does he plan to cast in his directorial venture? “I wanted Deepika (Padukone) but she didn’t like my script,” he replies matter-of-factly.
Bring the sudden boom in Marathi cinema to his notice and the actor is all praise for the recent releases. “I loved Gandha, Valu, Shwaas and Harishchandrachi Factory. I think the new generation has to be given credit for these very fine films. They are willing to experiment. And most importantly, their attitude is like ‘I have made this film and believe in it, you take it or leave it’. Films are no more made as per the audience’s tastes. I would definitely want to be a part of this wave in Marathi cinema,” he observes. As for Hindi films, he hasn’t watched too many to cite his favourite from the recent lot. “I don’t see my own films only. The moment my dubbing is over, my creativity is over. I have never been able to see my films objectively. I tend to get too critical,” he reveals.
Nevertheless, the overtly self-critical actor feels that he has been able to deliver a good performance after a very long time in Prakash Jha’s forthcoming film Rajneeti. “As you mature with time, your perceptions change. The so-called maturity that is (laughs). You are able to point out what is good and bad and you know where you need to improve. Owing to these factors, I somewhere feel I have done a good job in Rajneeti. And this film is the ultimate whereas the subject of politics is concerned. I don’t think even Prakash can make anything more on this subject after this film,” he states.
Talking about Ranbir Kapoor and Katrina Kaif, his co-stars in Rajneeti, Nana gushes, “These kids of today are just amazing! Ranbir is just like my child. He is undoubtedly a tremendous actor but Katrina really shocked me in one scene. This girl, who couldn’t speak one full sentence in Hindi properly, read out an entire page in pure Hindi at one stretch. She did it in one take. I was so taken aback that I started clapping for her. She had tears in her eyes. That shows how good and hardworking today’s generation is. If you want to compete with them, you really have to be alert and up to the mark.”
Well, one certainly awaits Rajneeti to see a yet another power-packed performance from Nana after along but for now, we look forward to his lovey-dovey act in Tum Milo Toh Sahi, which releases next week.