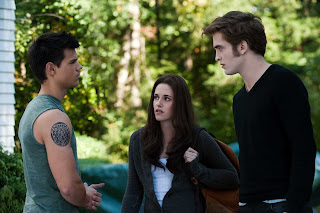 The Twilight Saga, like most films of its genre and age bracket, has had the problem of a strong division in its audience. One side comprising of the diehard fans and the other of normal movie goers. So the debate has always been as to where this franchise actually belongs, to the first section or the second? Twilight and New Moon (the first two parts) were mainly delights for ardent fans/readers of Stephanie Meyer’s literary version, but the third part, Eclipse, transcends these barriers of viewership and diminishes the fine line of division.
To begin with the story, it’s interesting how the title ‘Eclipse’ bares it all. New Moon justified its name by giving this vampire-human romance a ‘new’ dimension, that of warewolves. Similarly, Eclipse, as the name suggests, brings together all three central characters of the saga, Edward (Robert Pattinson), Bella (Kristen Stewart) and Jacob (Taylor Lautner) --- the vampire, human and the warewolf.
Victoria (Bryce Dallas Howard) forms a new born army of vampires by biting Riley (Xavier Samuel) to take revenge from the Cullen clan for her lover James’ death. Bella is in danger yet again and in order to protect her, there’s an unusual union this time, which is the most intriguing aspect of this sequel. The vampires and warewolves join hands to safeguard Bella, who’s the only tie between the staunch enemies.
With a new director onboard, Eclipse moves away from the intense style and slow pace of its predecessors. As compared to the earlier two, this one’s more lighthearted in its tone with enough chuckles from start to finish. Also, director David Slade combines action, romance and humour effortlessly in this part making it a complete package. New moon was a bit of a drag with little movement in terms of story and characterisation but this one is racy and has the story unfolding rapidly. So in that sense, you are hooked throughout as there is a lot happening with every scene.
Slade also gives enough scope to each character unlike the first two which concentrated only on Edward, Bella and Jacob. So you learn how Jasper and Rosalie got transformed into vampires, the two Cullens who hardly had any screen time in the previous parts. With this backgrounder, the actions and motives of the supporting cast become clear. The story has quite a few revelations, which I will refrain from giving away. But the highlight of Eclipse remains the love triangle between Edward-Bella-Jacob. Each represents a different idea of love. Edward and Bella share an eternal bond while Jacob and Bella’s relationship is more humane and governed by worldly notions.
Slade does a good job bringing variations yet keeping the basic essence intact. As for the performances, they aren’t any different. Pattinson is decent, oh he finally gets to smile. Lautner is to watch out for, and not for his abs alone! Stewart could do better though and bring in some life to her otherwise gloomy character.
Consisting of maximum action out of the three sequels, Eclipse is not to be missed!