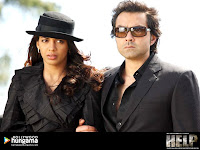 
We aren’t sure if Help would raise the bar for horror films in Bollywood as per director Rajeev Virani’s claims but it will certainly give filmmakers confidence to experiment with this genre. After Vikram Bhatt’s horror flick Shaapit, which was a fairly good attempt for its visual and sound effects, Help could be termed as a worthy follow-up!
Vick (Bobby Deol) is a successful filmmaker in Mumbai, horror films being his forte. His relationship with wife Pia (Mugdha Godse) is strained due to constant media reports of a link-up between him and his lead actress. To visit Pia’s ailing father, the couple travels to Mauritius, Pia’s hometown. The trip turns out to be more than a visit as Pia gets possessed by her dead twin sister’s spirit. Her sis who died by drowning herself has come back to unravel two mysteries… that of her death and their mother’s. And para psychologist Aditya Motwani (Shreyas Talpade) is the only one who can help save Pia’s and her to-be-born baby’s life.
Like Shaapit, Help too takes on a scientific approach and yet projects the existence of that something beyond science. But it doesn’t really get into much detailing like the former. Skimming through the five stages of possession, it ultimately boils down to the good old premise of revenge. What perhaps works most in Help’s favour is sound technicality. Both visuals (barring a few scenes that look very animated) and sound techniques are effective, enhancing the horror experience but the biggest loophole are the dialogues, again. The recent Hindi horror films somehow seem to be having a problem in getting that aspect right. Both Shaapit and Madhavan’s 13B suffered the same negative. Just when you are about to get goosebumps, some silly conversation inevitably invites laughter. A big hazard for films of this genre!
Apart from that, it’s the sudden brake of songs, which, although provides relief and is an inseparable aspect of our films, is a forceful element in a horror. Thankfully, Help has a hummable music score, which compensates for its non requirement.
This is technically Virani’s debut as his first Hindi film is yet to be released. He directed The Whisperers prior to this, a thriller with Rahul Bose and Manoj Bajpai and Help is his first horror venture. The newcomer is at ease with the genre and doesn’t disappoint. Coming to the performances, it was refreshing indeed to see Bobby Deol on screen after long. A complete eye candy, the actor brings in freshness to the film and makes a great picture with Mugdha. Mugdha, on her part, pulls off a fine act too. She does justice to her first full-fledged lead role. Shreyas Talpade, on the other hand, is hardly noticeable. His special appearance is too brief to draw any attention.
Help may not run a constant chill down your spine except some screams here and there but is an engaging watch nevertheless!