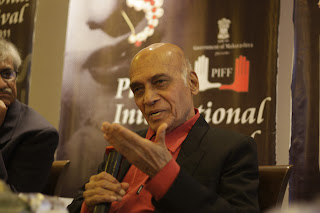 Every time one hears Kabhi kabhi mere dil mein khayal aata hain from the film Kabhi Kabhie or Dil cheez kya hai from Umrao Jaan, the genius of a music composer called Khayyam comes to mind. This legendary musician has given the Hindi Film Industry some of the most unforgettable melodies dating back to the ’50s and continues to do the same till today through selective albums featuring ghazals and bhajjans.
The 84-year-old musician terms his musical journey as a mission to educate the masses. “My mission has always been to educate people with my music. Not everyone gets a chance to gain formal education and if my songs become the source of some learning to anyone, I would feel that my mission is accomplished,” he says with a smile that seldom leaves his face.
Having worked with all the biggies of the industry, from Raj Kapoor to Yash Chopra, Khayyam’s breakthrough film was Footpath in ’53, starring Dilip Kumar and Meena Kumari. “Footpath gave me an identity. The music of this film became a rage as it was completely different,” he informs. The film also featured the first cabaret number sung by Asha Bhosle, making her an overnight singing sensation. “Asha is a supremo but nobody had recognised her multifaceted talent till then. I always knew that she could sing all types of songs and asked her to sing for Footpath,” he continues.

The hit combo of Khayyam’s compositions and Majrooh Sultanpuri’s lyrics started the former’s successful musical liaison with the greatest poets in the country. “Agar nagme achche ho toh sur apne aap mil jaate hain,” the veteran feels. “Every musician must learn Urdu or Hindi if he wants to compose for Hindi films. Knowledge of the language is most essential for any composer. Talking about Ashaji, she herself learnt Urdu. Also, I strongly feel that Hindustani classical is a genre that no one can ever eliminate. So we should not underestimate it. It will never die and will always have takers, just like ghazals, which I consider as a gift to our country,” he firmly adds.
Calling the period from ’60s to ’80s as the Golden era of the Hindi Film Industry, Khayyam laments the fact that today’s music scenario has turned upside down in comparison. “Aaj ka jo maahaul hai woh electronic rhythms ka hai. It is not music but noise and madness. There is no antara or mukhada, the songs just start and end abruptly with unpleasing body movements. I think what is happening nowadays is very harmful for the young generation. Talking from the perspective of medical science, this kind of noise will prove dangerous for them in the long run,” the musician says with immense concern. He also feels that most music that sells today is due to the mighty promotional campaigns that invite budgets, which go way beyond that of the film itself.
“We really want to urge the government to do something about remixes as well. They should stop. The ones who are doing this should come up with something of their own rather than spoiling other people’s works,” he points out with much aggression. But having said that, he is a bit relieved to see some ray of hope in producers and directors who are encouraging Sufi music in their films. “There is some realisation and I am sure things will change for the better,” he hopes.
The composer is soon coming up with an album called Message of Love, which will feature debutante singer Anshu Sharma and Anup Jalota.