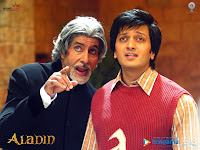 
After the failure of Drona, the fantasy genre working in Bollywood has been a fantasy in itself! But thankfully, Aladin succeeds in breaking this barrier or notion as one may call it, to a considerable extent. There is nothing new as far as its concept goes nor does it offer anything exceptional in terms of storytelling but yet, carves its way to being a pleasurable viewing experience.
Aladin Chatterjee (Ritiesh Deshmukh) lives in Khwaish city, resembling an archaic Egyptian kingdom. His family is long dead and has noone except Marjina (Ratna Pathak Shah), the owner of his college café (whose food apparently leaves students in sheer horror), to share his loneliness with. He silently admires the new entrant in college, Jasmine (Jacqueline Fernandez), but is forever bullied by Kasim (Saahil Khan), who also likes her. His drab life finally takes a U-turn when genius, the genie (Amitabh Bachchan) emerges from the lamp gifted to him by Jasmine.
Genius is in a hurry to grant Aladin three wishes and go on a retirement plan or else his contract of being a genie will get extended by a few million years. While Aladin is struggling to figure out his three wishes, the evil genie Ringmaster (Sanjay Dutt) is chalking out a plan to destroy both Genius and Aladin and thereby gain power to rule over the world.
Director Sujoy Ghosh very well creates an aura of fantasy through some wonderful cinematography, sets and visual effects. Although there is nothing drastically different in the storyline, the treatment sure is! Elements like art direction, music and choreography, the strong points of Aladin, makes it a refreshing film. One can also see sparks of imagination and creativity in the picturisation of certain sequences and characterisation. For instance, Ringmaster’s character with his ‘fantastic five’ gang (a joker, a knives’ man, a fire emitting masked woman, a hunter man and a long haired monster like man) is interesting. In fact, it is their introduction that marks Aladin’s edge above the others but eventually fails in sustaining the excitement and promise.
Amitabh’s entry generates some curiosity too (thanks to the visual appeal once again), until he breaks into a song and dance routine and turns it into a huge disappointment! That’s the first time you actually feel that the film is drifting away from its fairytale setting and falling prey to the Bollywood rigmarole. Nevertheless, it’s Ritiesh’s adorable screen presence that keeps you glued to your seats all the way, despite a fair share of slack moments in the narrative and a very hurried and unconvincing flashback. He is a delight to watch and fits in the shoes of the feeble yet charming Aladin so effortlessly that it’s difficult to picture anyone else in that role other than him. Amitabh is fairly good too though there is an overdose of the ‘Yo Brother’ bit in his speech. But the energy that he puts into the character takes over that little hazard.
Sanjay suits the evil Ringmaster’s part to the core but doesn’t have much scope to perform nor does debutante Jacqueline apart from making a pretty picture! Although she’s yet to hone her acting skills, she very well looks the beautiful and dreamy Jasmine in this film. Children would surely enjoy Aladin, as for adults, indulging in a harmless fantasy with some nice performances and visuals, is not that bad a deal after all!