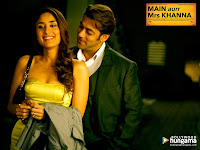 Bollywood needs a resurgence desperately, if not for the avid cine-goers, then atleast for the film critics! Watching one bad film after the other, week after week, is truly becoming a Herculean task. And just when you thought that nothing could get more worst than the last bad film you saw, you see Main Aurr Mrs Khanna, which goes ahead and raises the bar for careless and senseless filmmaking.

Picture this: Sameer (Salman Khan) and Raina (Kareena Kapoor) fall in love and become Mr and Mrs Khanna. They are a ‘happily ever after’ couple living in Melbourne until Sameer loses his job and is forced to leave the place and shift to Singapore in search of work. He informs Raina on the airport, an hour before the flight, that he can’t take her with him and that he has booked her ticket for Delhi. After a mild protest, she agrees to go to India and live with Sameer’s parents, who were once against their marriage. But as soon as he leaves, she quickly changes her mind and decides to stay back in Melbourne and wait for him till he returns successful to fetch her.

Debutante director Prem Soni has sadly treated a subject as delicate and intense as relationships like a mindless comedy (sans any notable humour though), with no justification whatsoever to either the course of events taking place or the behaviour of characters. So just when you are taken aback by Sameer’s strange behaviour towards Raina at the airport, you are introduced to another wierd character, Akash (Sohail Khan), who keeps chasing Raina despite knowing that she is married and not interested in him a bit. Maybe his ‘lust at first sight’ for Raina just takes over all possible practicality.

The so-called story and screenplay just gets more and more inane from there and the ending is a dud with Raina and Sameer getting back together leaving Akash for another Raina (Deepika Padukone in a guest appearance) who has just had a break-up with her boyfriend by the name of Sameer. How forced and obvious can things get? No wonder there was a buzz of Ronnie Screwvala having constant tiffs with Sohail Khan during the making of this film. Co-financing such a ridiculously lame script is sure tarnishing a reputation of having one of the finest production houses in the industry for Ronnie.
Main Aurr Mrs Khanna lets you down in all the departments. It’s ironic to see Salman and Kareena attempting at making something worthwhile out of this sheer disaster of a film with their presence and failing miserably. Salman is still emotive in a few scenes but Kareena is a mere glam doll in this one, absolutely stone faced! Sohail’s funny act is less than impressive too. Nothing really helps this film to reach the ‘convincing’ mark. The music offers no respite either. Except for the number Door se alvida, the rest of the songs are pretty off key, just like the script. Besides, they are just randomly thrown in and pop up anytime. Preity Zinta’s item number is the biggest disappointment of the lot. The attempt to ape Kajra Re falls flat and a once really charming Preity does an irritatingly dud act with both her expressions and dance moves seem to have gone haywire.

Watch this flick if you are short of some high-end amusement! After all, it’s amusing to see Salman with a crew-cut in one scene and with long tresses in another, isn’t it?