All for fun: Sanjay Leela Bhansali 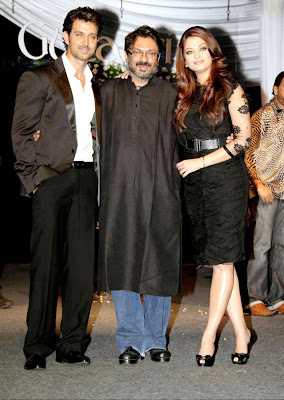 He is said to get along with very few people in the industry and is someone who is happy being in his own world. But Sanjay Leela Bhansali is slowly and steadily defying all norms about himself. He has not only come out of his cuckoon by taking to reality shows (Jhalak Dikhla Jaa, The X Factor) but has also ended his supposed long standing enemity with Karan Johar and Farah Khan.
Gelling and kidding around with the contestants on The X Factor, Sanjay leaves behind his serious image and comes across as a different person altogether. “People have just formed this whole impression about me owing to the genre of my films. But I am very fun-loving by nature. This is the real me. Even on the sets of my films, we have a lot of fun. While working on Black, Rani (Mukherjee) and I used to burst out into laughter every time the shot was done. Aishwarya (Rai-Bachchan) generally, can’t stop laughing too. So we are all fun-loving people,” he justifies.
In that case, has he ever thought of moving away from intense films and making a comedy for a change? “I am dying to make a comedy. But that’s a very difficult genre. So I am going to hold on for now. Meanwhile, I am producing two comedies, My Friend Pinto and Shirin Farhad,” he informs. The latter, directed by Sanjay’s sister Bela, marks a debut of Farah Khan as an actress. How did he see an actress in her? “We are all actors. It’s just a matter of tapping that potential,” he says, smartly evading the question.
While Farah will be seen putting on a completely different hat with Shirin Farhad, Sanjay already played a new role in his last film Guzaarish, that of a music director. “I was waiting for it to happen. Music is an integral part of me. I start every film with music. Everything revolves around that. In fact, music is constantly playing on my sets too. Hrithik and Bachchan saab were so baffled by it. But for me, it sets the mood. Another reason for this step was that I couldn’t explain what I felt for the central character in Guzaarish to anyone else. So I had to express myself through music,” he narrates.
Ask him about the ongoing trend of sequels in Bollywood and whether that indicates a drought of original ideas, and he promptly replies, “I can’t comment on what other people are doing but the very fact that they are being produced in such a large number means they are working with the audience. Besides it’s not an easy thing to make a sequel too. It’s tough to expand a particular idea.” Does he enjoy watching sequels? “I enjoy all kinds of films,” he says on a concluding note.