Saying it as it is: Anurag Kashyap 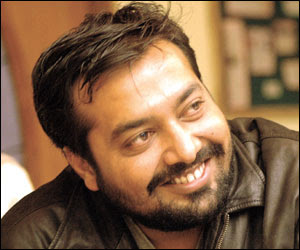 His films usually portray the grim underbelly of human existence with a good amount of technical finesse and creative ingenuity thrown in, but as a person, Anurag Kashyap brings with him none of that heavy air. He’s super chilled out and always willing to lend a helpful ear. There is almost something childlike as he punctuates his speech with his twinkling, disarming smile.
As someone who has come to personify the truly hatke, out-of-the box cinema, Anurag for a while now has been the ultimate inspiration and go-to man for young, aspiring directors.
In town to promote his next directorial venture That Girl in Yellow Boots with wife and actress Kalki Koechlin, Anurag tells us that the film is quite different even by his standards. The film was of course made a while back, but the maker says he was waiting for the right buyers. “We were looking at international distribution as I think it’s important to expand your audience, make more money in order to make more films,” says the maker of films like Black Friday and Dev D.
A thriller revolving around a girl’s search for her father in an alien city, That Girl In Yellow Boots is the story of Ruth, played by Kalki, and is set to premiere at the Venice Film Festival along with a screening at the Toronto International Film Festival. The film also stars Naseeruddin Shah and is co-written by Kalki. “I wanted a woman’s perspective for this film. So I urged Kalki to write the script with me and she’s pretty good at it,” he smiles.
The conversation then veers towards the topic of freedom of expression in art, against the background of Prakash Jha’s Aarakshan getting banned in several states. “I am completely fine with people’s criticism. If people object to my film, I can have an argument with them and sort things out. But in the case of Aarakshan, it was political interference and this is going to happen every time a film is based on social or political issues. It’s a fight that we filmmakers have to take up. We went to the court with Black Friday. Ultimately, it’s the people who decide whether a film is good or bad, not politicians,” he says firmly.
That said, Anurag believes that things are changing for the better with more and more young talent knocking in.
Apart from That Girl In Yellow Boots, the director is working on Gangs of Wasseypur and his first big budget venture Bombay Velvet, which reportedly packs in quite an enviable star cast --- Shah Rukh Khan, Aamir Khan and John Abraham. Is that true? “No no no. There are no big stars,” he denies hurriedly. “We are starting the film next June but no Shah Rukh Khan, Aamir Khan are there. We are yet to decide on the cast,” he concludes flashing an expression that displays his ever apprehensive stance on casting big stars.
And what about acting? Not many know that Anurag entered the industry with the intention of becoming an actor and has already faced the camera for a few films like Luck By Chance, Shagird and Onir’s I Am.  But his fascination for it has clearly waned. “Acting is boring. No more of that for me,” he laughs as we part.