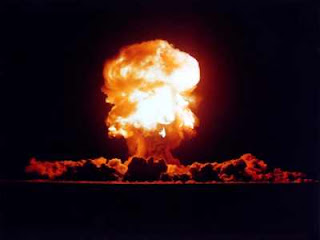 We have done it again! Given a chance to the world, and ourselves, to talk about yet another spectacle till the time the next one occurs.
Are bomb blasts terrorising anymore? Not at all. They have become a part and parcel of our lives and going by the casual and insensitive approach towards them, I think it’s high time we started enjoying the whole event rather than worrying about the dreadful consequences and feeling sad about all the innocent people who have lost their lives time and again in this regular bloodshed.
What should be more important is that we are adding on to the list of ‘spectacular’ dates in our ever lightening up history. After 26/11 and 13/2, its 13/7 now! And the three bombings in a row (not referring to several other minor blasts in other states which didn’t deserve that much mileage) have indeed taught us quite a bit. Well, just like our Ministers, we are becoming experts in analysing the quality of bombs used by attackers and oh, judging the intensity of explosions as well. At least now we know that the bombs used were IEDs (Improvised Explosive Device) and not to forget, the intensity of explosion was more at Opera House than Zaveri Bazaar in the recent scheme of happenings.
Who cares about learning from rising security concerns in future when this bit of information is enlightening enough after every blast! And then of course, there is a sincere attempt by the media (news channels to be more precise) to get into the heart of the matter always by constantly badgering the victims and their families with the golden question: “How exactly are you feeling at this moment?”
While the Ministers are engrossed in exploring the intensity of explosions, the media, on the other hand, never leaves a single chance to delve into the intensity of emotions. Bomb blasts are no more shameful realities but high-end dramas brought to us exclusively by news channels on our small screens. So till the time you are lucky to escape the carnage, you have the privilege of sitting leisurely at home and enjoying the drama on television over a glass of wine.
But naturally then, here we are, raising a toast to the Mumbai spirit, the spirit which is ironically a sign of acceptance of terror. Rather than the sight of dead bodies, what’s become more shocking and depressing to see is how fast people pick themselves up and move on to routine the very next day…so unaffected, so detached!
And it’s disheartening how this strange kind of detachment has gripped each one of us today, that which portrays defeat rather than any possible strength or rebellion.