Film Review: From Prada to Nada 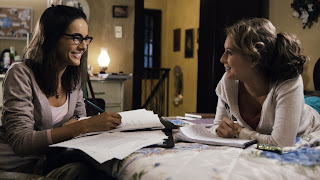 
With a completely putting off title and uninteresting posters, one can hardly ever perceive From Prada to Nada to be an adaptation of Jane Austen’s Sense and Sensibility. It rather rings in as a weird mishmash of Devil Wears Prada and Confessions of a Shopoholic as you step into the theatre to watch this chick flick.
But once you enter the lives of Nora (Camilla Belle) and Mary (Alexa Vega), in no time does the film transport you back to Austen’s 19th-century novella. Not literally though! Being a modern and Latino version, From Prada… doesn’t recreate the 19th-century England but presents a 21st century Los Angeles as the setting of this rags to riches story of two sisters whose lives take an overturn after their father’s death.
From a palace to a ghetto, the drastic shift enables Nora and Mary to discover life and love together, leaving behind all their contradictory personality traits to achieve one goal --- happiness! So while Miss Sense learns to love, Miss Sensibility learns to accept true love amidst a bunch of unpolished yet full-of-life Mexicans.
More than seeing it as an adaptation, there are chances you will enjoy From Prada… as a film on its own. Its funny and touching moments, its heartwarming and whacky characters… everything remains relatable without getting too dramatic or forced. But at the same time, one wishes if the story was dealt with in a more in-depth manner rather than keeping it too much to the point. In an attempt to keep it crisp and light, Gracia does end up making the characters appear a bit sketchy at times.
Also being an Austen story, the two leading women pretty much take over the proceedings, leaving the men in their lives nothing more than mere eye-candies hovering around in the background.
The Latino twist adds an undercurrent of the Mexican population dominating East LA and hints at some cross-culture sparks between Mexicans and Americans. Like Mary is often mocked at as a ‘blonde’ by the neighbourhood kids and she in turn insists on being an American more than a Mexican despite belonging to the lineage of the latter.
The actors are all watchable but the pick of the lot is Vega. She, as the stylish, outspoken and slightly vain Mary, is definitely a one-up over the plain-jane and down-to-earth Nora played by Belle. Even though From Prada… is a good one-time watch, it’s not really a departure from the predictable rom-com brigade.
So just a disclaimer: don’t go expecting anything different.