Jack of the trade: Hrithik Roshan 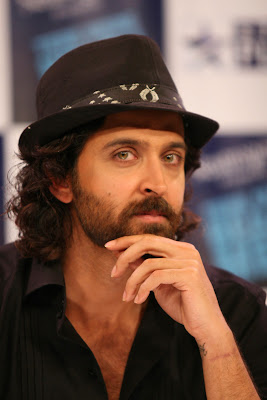 Yes, it was nothing less than a mission for the hundreds of mediapersons from across the country gathered at Filmistan Studio, to catch the heartthrob of the nation live. It was a golden opportunity to have a tete-a-tete with one of the undisputed rulers of Bollywood in recent times, the only one who is probably in the same league as the three Khans of the industry.
So there we were waiting eagerly in hope of some juicy and never-heard-before ‘exclusive quotes/bytes’ just as the photographers aimed for that perfect shot of the hottest actor that B Town has ever had. And then, there was buzz of the dancing sensation doing a little gig too as an added attraction. Reason enough for breaking your legs by standing for an hour at a stretch? Maybe!
Every time the door of the humongous vanity van, tagged ‘Hrithik’, flung open, the cameras took position. But it wasn’t until an hour and a half of many unfruitful attempts that the shutterbugs finally caught the star himself emerging from the van. This rendezvous wasn’t going to be all that easy!
Causing a mini stampede, Hrithik rushed inside the studio where the stage was set for the announcement of Star Plus’ new dance reality show, Just Dance, the show which will mark the debut of Hrithik Roshan on the small screen. You heard that right! Come on, if everyone from Amitabh Bachchan to Shah Rukh Khan can, why can’t Duggu? After all, it’s become difficult for anyone --- a celebrity or wannabe celebrity --- to resist the power of the small box nowadays. “TV is a bigger box, its size being deceptive,” Hrithik rightly says.
But the actor adds that he was never inclined to do television and the reason why he decided to take the plunge was solely because of the concept of Just Dance. “I was amazed and identified with the philosophy and impact of this show. Just like it is necessary for me to identify with a film before signing it. Besides, I have always believed in the spirit of competition. It nurtures passion and gives rise to innovation,” he points out. Hrithik will be seen judging this supposedly biggest dance competition in India alongside choreographers Farah Khan and Vaibhavi Merchant.
Dance has undoubtedly been an integral aspect of Hrithik’s personality. Right from his first hit Ek pal ka jeena to Dhoom machale, the highlight of a Hrithik Roshan film has always been a smashing dance number. Yet, the actor doesn’t consider himself to be the ‘God of dance’, as he is called by most people. “I don’t think I am the God of dance or anyone else is. Every dancer can inspire and has an individualistic spirit provided he doesn’t imitate. Similarly every actor has his magic moments. Shammi Kapoor, for instance, was a great dancer. The way his body moved to music created magic,” the ace dancer says humbly. Having said that, he doesn’t deny that he personally idolises Michael Jackson.
Talking further about what the art form means to him, Hrithik reveals, “Dance, for me, is an expression of some kind of emotion. The first time a person must have danced, he must have either been jubilant, angry or sad. There must have been some emotion that he must have expressed through his dance. Hence, I take this art form to be beyond steps and 1 2 3 4. It tells you where the dancer is coming from. His story is there in his movements.”
Looking debonair in a brown suit and white shirt with red polka dots, Hrithik is every bit the stunner he comes across on screen. Someone who can set many ‘young’ hearts racing. But amidst all the drop-dead gorgeousness, there is an evident discomfort with attention that this hunk sports throughout. As you watch him in flesh and blood, you can’t miss a distinct air of consciousness that surrounds him. Also, he is most at ease while talking about his favourite subject, dance, but astonishingly pulls back when the topic comes to films. So what next is in line after two failures (Kites and Guzaarish)? “Only after big failures does come the biggest success,” he smiles garnering an applause for his Alecy smart statement. “I have completed ten years in the industry but I still look at myself as an aspiring actor. I have yet to learn a lot of things,” he adds as a further clarification. And thereby starting the process of curt one-liners that he uses as a shield for his unwillingness to reply.
Ask him what’s his take on Aamir Khan doing Dhoom 3 and he cuts you off. “What do I have to take from that? It’s his film now,” he says sarcastically. Coming back to television, one reminds him how there a lot of actors dabbling in TV already. Doesn’t he fear of getting stereotyped by being a part of the herd? “Let’s put it this way…there are a lot of actors doing films. But I have to say that seeing Amitabh Bachchan on the small screen has been very inspiring,” he signs off. With such preciseness, need we say that we were left asking for more? Anyway, its tough to get enough of Hrithik Roshan.