In search of Home

“Didi, you know just like me, many of my friends here are going to die very soon,” were the words of a six-year-old boy at an orphanage for HIV afflicted children on one of our visits there as volunteers of a community service based club. Those words had a hundred meanings. They screamt out the fact that the innocence and playfulness of a child at that age were so cruelly replaced by the sheer harshness of reality. Reality of being abandoned and having absolutely no right to live and experience the golden period of their life --- childhood. And this is the case with not the Aids inflicted alone but with every orphan, who instead of blooming under the nurturing of a parent at that ripe age, just like a flower, are so bravely facing the dark truth of having no one to call their own apart from maids and matrons at orphanages providing them with the basic necessities like food, clothing and shelter.
As a volunteer, I have been fortunate to spend some quality time with these kids and thereby felt the immense satisfaction of giving them atleast some moments of joy. Each time I saw their twinkling eyes flash a longing for the love and care of parents and yearning for a place they could call ‘home’, I couldn’t help thinking how lucky I was to have a family back home and how conveniently do we take them for granted. Thankfully, with changing times, the stigma attached to these orphans is slowly disappearing and many couples are coming forward to invite these children into their lives with open arms. Adoption is no more an option only for those who can’t conceive. On the contrary, more and more couples who already have a biological child are opting to adopt, purely with the intention of providing an ideal childhood, which every child rightly deserves. We take a peek into the gifted world of some of these kiddies with their respective families and take the opportunity to salute the big-hearted couples, who have fought all odds to bring in a ray of light in the lives of these little children and given them that one thing in abundance that they need the most, ‘love’!
For Shumita and Shripad Mahajan, their adopted daughter Hiya (which means heart in Sanskrit) has been a very lucky child and has woven everyone in their family together. “She is the cynosure of all eyes in our family and can get away with almost everything,” laughs Shumita. After a rigorous one and a half year’s paperwork process, when the Mahajans were finally called to select a child by the adoption centre, a three-month-old girl was brought in, burning with fever. “As soon as I took her in my arms, she threw up on me. That time I realised how much she needed me and vice versa. Also, her striking resemblance with Om, our biological son, somehow reconfirmed that she was meant to be with us,” she narrates further. Hence, Hiya not only received a mother and father but also a brother, who is extremely protective about his baby sister. “We are so engrained in our system about the same blood, genes, etc that we often forget that every child deserves to have the pure and unconditional love of a parent. And though the organisations and institutions may provide orphans with all the necessary facilities and look after them, they cannot meet the emotional needs of these children,” explains Shumita.
In case of Meghna and Rishi Varma too, Aaliyah, their seven-year old daughter has not only fulfilled the meaning of their life but has also brought the family closer. “She was six and a half month old when we adopted her and it’s been a beautiful process of bringing her up ever since. The day we saw her for the first time, there was an instant connection between her and us. I still remember how her blank eyes were selling the idea ‘take me home’ and we had tears in our eyes,” recollects Meghna. Like Hiya, Aaliyah too has an older sibling to play and fight with. “Somewhere after the birth of our son Aditya, there was a selfish motive of having a girl too. That’s how we thought of adoption and it’s unbelievable how Aaliyah looks so much like me and my mother-in-law,” she smiles. “It’s very easy to have your own child but there are many kids out there already who need a home,” she continues. Today, Aaliyah has been very well informed that she is adopted and she often asks Meghna about her biological mother. “She also asks me that like her elder brother came from my tummy, where did she come from? And I just tell her that she comes from my heart,” says Meghna. 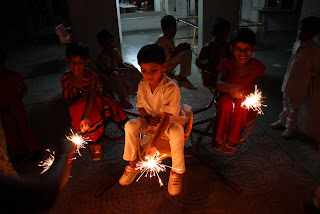 “One should always remember the aspect of social responsibility in our lives. There is someone somewhere working for your happiness and well-being and you have to give back in some way,” feels Vinayak Gadgil, who along with wife Aparna, adopted Ananya. “The thought of adopting a kid was there way before marriage. Hence, after Om was born, we took the plunge. And frankly, today we don’t feel that we have done anything special. Both Om and Ananya are just the same for us. There is no special treatment given to any of the two. I just feel one thing, with no fault of theirs, why should these children suffer and remain without parents?” he questions.
Owing to the wonderful equations that these children share with their families, you realise that the couples need these children just as much they need them. After Aanandita came into the lives of Dr Vikrant and Anju Ingle, she completely changed their world. “When we saw the state of these small kids at the orphanage, there wasn’t a second thought. And till the day you don’t have a child at home, whether your own or adopted, you will never know how it feels,” states Vikrant.
According to Maina Shetty from BSSK (Bhartiya Samaj Seva Kendra), the scenario of adoption has surely gone through a tremendous change and there are a lot of factors that have contributed to it. “Firstly, the couples coming in for adoption now are very young, most of them being in their late 20’s. This helps in a very big way as they are educated and well-acquainted, leaving more scope for discussions and counselling. Secondly, a lot of couples don’t hesitate to adopt even special children or the ones with illnesses like a hole in the heart, etc due to advanced medical facilities,” she informs. No wonder then that Alok and Mira Nair insisted on keeping Roshni inspite of knowing that she had a hole in her heart. “We came to know after we had decided to take her and the institution did offer us another child, but we thought that if we would have given birth to Roshni, would we have left her because of the illness? No. So how could we leave her now? Also, when we saw her, she was very ill and yet had a smile on her face. That really touched us,” narrates Alok.
“Comparatively, there are less reservations too now in terms of religion and colour. Earlier couples were very skeptical about the background of the child, the caste, skin tone and much to one’s astonishment, they were averse to glasses as well. But today, we have crossed that boundary. It’s really great to know that there are atleast 100 families waiting now to adopt from our centre at any given time,” affirms Shetty. Another example of a perfect family is Nikhil, Deepali and Keya Kumta. “We share such bonding and attachment that not a single moment have we felt that Keya is adopted. Growing up in an organisation is just so unfair to a child,” says Deepali. Keya too knows that she’s adopted but through the many stories that her parents keep telling her. “She loves listening to her own stories. Like we tell her how she was living with this maushi from whom we brought her one fine day as we were looking for a daughter and she was waiting for a mom and dad to take her home. And just like her, there are still so many of her little friends out there who are waiting to go home,” she narrates.
Some have already found their destination, their future, but there are a lot many yet at the brink of an endless wait, dreaming and praying for a mummy and daddy dearest to come and take them into a world of boundless love and affection!