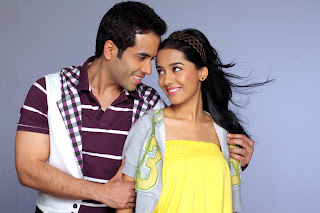 When it’s a Rajshri film, you know what to expect! A large family brimming with brothers, sisters, their respective spouses and kids, neighbours, friends, relatives....all coming under one roof (and often staying under one too) to celebrate weddings, festivals and most importantly ‘togetherness’. Not to forget the celebration taking the medium of a dozen songs spread throughout the three-hour span.
Even Main Prem Ki Diwaani Hoon, which moved away slightly from the joint family trend, pretty much had its roots intact in the filial flavour. But with Love U…Mr. Kalakaar!, the Barjatyas mark a veritable departure and a welcome one at that! They not only change the setting, from sprawling mansion-like houses to a swanky corporate office, but also present a crisp plot cutting off their trademark elements…excessive melodrama and a song for every occasion.
With his meager earnings, cartoonist Sahil (Tusshar Kapoor) believes in living for the moment with no future plans or savings. His creative world turns upside down when he is pushed into an impossible scenario to win over his lady love Ritu (Amrita Rao). In order to test his capabilities, Ritu’s father (Ram Kapoor) appoints Sahil as the MD of his automobile company for three months and asks him to generate maximum profits.
This is certainly a defining film for its lead actors, Tusshar and Amrita, who haven’t got a chance to show their credibility as actors to the fullest capacity so far. While Tusshar moves on from his popular yet stereotypical and caricaturish image in the Golmaal franchise to play a refreshing flesh and blood role, Amrita successfully shows her ability to pull off a character which is a balanced mix of modern and traditional vis a vis the ones she has done prior to this film. The two make an admirable on screen pair too, sharing an easy chemistry with each other.
Despite being a major transformation in many ways, Love U… still maintains the Barjatya touch by keeping the propagation of human values at its core. In the form of a simple or if we may say, predictable love story, it actually ends up being a good lesson on the prerequisites of building a strong foundation, for both a company and a relationship. It harps on how employees should be treated more like human beings than “machines” for a long and successful run of a company and how a man has to be a good human being than a businessman to be successful in life. It also projects the often drawn debate between creative and technical professions.
In an entertainment driven industry where ‘big laughs’ mostly claim to decide the fate of the box-office, Love U…Mr. Kalakaar! is an inspiring example that a film’s responsibility is much more than that.